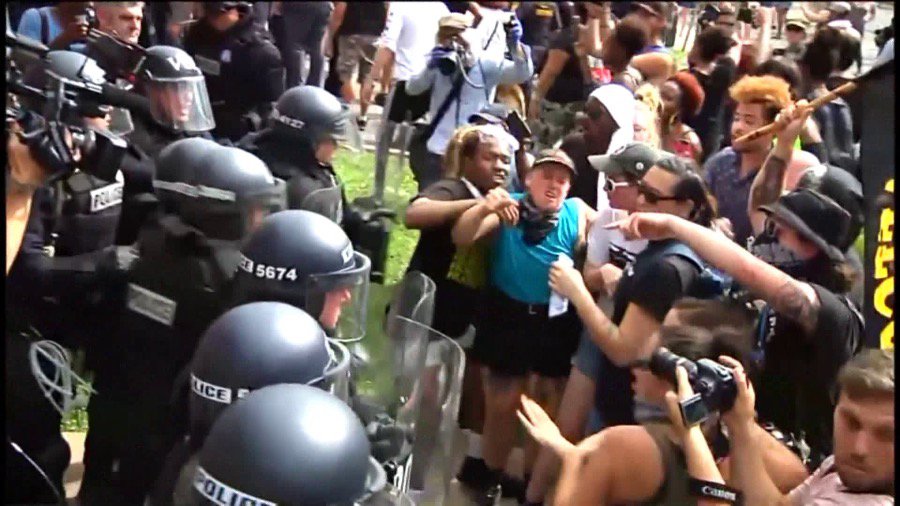 Every Friday evening my high school minions (no longer munchkins) bring me the tough questions about life, love, and international politics based on something trending on social media. This week, I'm bringing one.

Charlottesville.  How do we encourage our kids to stand up for what they believe in without falling into the trap of fighting hate with hate.

This video may seem inappropriate to show to high schoolers with all the swearing, nudity, and death.....but it's exactly the type of thing they are finding on their own and bringing to me to help them process. Here is how we're talking through it.

Strength is being strong in your convictions.  People of true strength don't generally get this angry or defensive when prodded because they don't have to.  If someone came into this room right now, pushed me and yelled "your name isn't Katie you liar, IT'S JILL!!!"........do you think you would see me get angry? Would you be angry? Would any of us be interested in spending our precious Friday class time proving to this angry, physically aggressive instigator that my name is Katie? Of course not.

We know who we are here.  When you know who you are, you don't get knocked off your rocker by someone else's anger.

That covers other people's anger, now let's talk about our own. If you've never found yourself furiously angry with someone for challenging your beliefs, you will.  This is normal, but acting on that anger is serving your ego, not your cause.  Acting out of anger will likely to cause you to lie, devalue yourself and others, and makes the WORST possible case for your worldview.

What if one of the women in this video was me.  Would you be proud of me even if you agreed with my underlying beliefs? No way.  Actions speak louder than words and actions or tweets made in anger live on the internet FOREVER. #reallifeconsequences

Hate isn't in America or in Charlottesville, it's in people's hearts.  It is too difficult at times for individuals who don't feel loved to act lovingly. We run into this all the time at school with bullying.  Although I believe there is a real element of evil that can manifest itself in individuals, most hate is just hurt.  Hurt people hurt people.

We all know the right thing to do when we encounter a hurting, angry person is to "take the high road" and love them but it's very important to first ask ourselves if we are capable of doing that. Even if you want to reach out to this hurt person in love, more often than not you may find yourself unable to do that because:

If thats how you feel then you aren't ready to do something positive with your beliefs and thats ok.  You'll get stronger as you learn and experience more.  As you get stronger you'll change your mind about what constitutes belief, strength, and fighting.

The good fight won't look like this video.  It also won't garner you any attention because that's not the culture we live in.  Fight anyway, in your way, in your time, and don't beat yourself up over the times that you weren't ready.

Social issues, whether global or personal within your group of friends, are always going to try to back you into a "with us" or "against us" stance.  This mindset is a lie and a convincing one.  Thinking this way is the path of least resistance but it also dooms a conversation before it starts and it can put you in a box you don't want to be in.

We see this in the actions of the protestors and the counter protestors.  Their words say "we matter".....but what both sides are hearing is "we matter....you don't". We're right (and righteous), you aren't.  Our anger is justified, yours isn't.  The word "winning" was thrown around in other videos as in "we will win and you will lose". It doesn't take us long to realize that no one won.

Too many people planned on showing up angry and leaving angrier.  The women in this video are so deep into their own anger that even witnessing a death doesn't shake them out of it.

When you feel as if you're being forced to represent one side or the other, take the third option and represent yourself.  Make a different choice, bring a new voice, and tell people what you're for instead of what you're against.

I love, Love, LOVE you minions.

***Disclaimer*** I realize that there are plenty of videos on youtube of real conversations that were non violent and of people who dropped everything to help. We are watching and talking about these videos too, however these are not the videos getting the most views. Our kids are seeing the lowest common denominator pop up in their feed and not neccissarily doing further investingation into the issues.  When we search Charlottesville, this is the first thing we're seeing.

Thank you for subscribing!

You will receive an email (at most once a week) with any new articles.

You can unsubscribe anytime with a link in the footer of the email.